Macroecology is big. Spatially, temporally, taxonomically. Andrew is part of working group applying ideas from macroecology to host-parasite data. To kick things off, the group has written a review/synthesis paper explaining the goals and outlining the challenges and opportunities that lie ahead. It’s here. 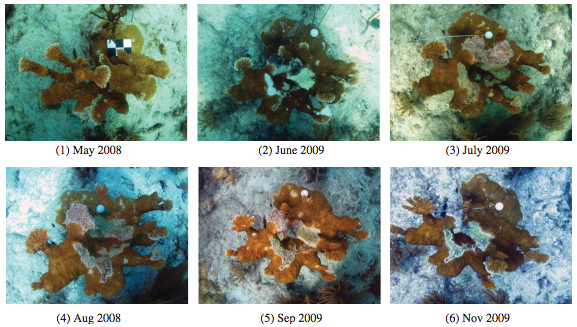 As part of large group, lab members Ashton, Brett and Andrew have been exploring some of the challenges in identifying causal agents of disease affecting coral populations. The host species is elkhorn coral, which has been experiencing alarming declines in recent times. These studies help to develop surveillance, diagnostic and modeling approaches to learn as much as we can about this important reef-building coral species. 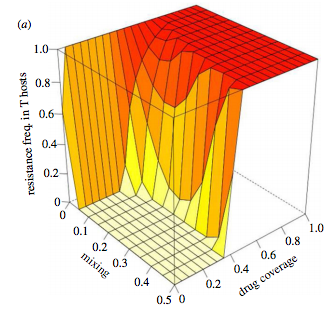 MRSA and extensively drug-resistant TB are just two examples where we’re running out of solutions to combat pathogens. In animal health, refugia are increasingly discussed as a management strategy. Refugia are untreated subpopulations – they provide a safe haven for pathogens. By connecting refugia with drug-treated populations there is hope to limit the spread of drug resistance at an acceptable cost in terms of disease burden. Basically, the connections let drug-susceptible pathogens into the treated population to stop their drug-resistant counterparts taking over. We built a model to try and clarify when this sort of strategy might work (Park et al. 2015, Biol. Lett.). We found that the anticipated outcome (strong connections = high prevalence and low resistance in treated groups) was too simplistic. Rather, there are epidemiological and evolutionary interactions at work and these can be understood by decoupling transmission and selection through mathematical analysis. 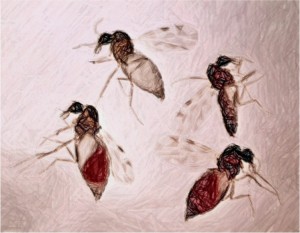 This is a question we got interested in through hemorrhagic disease, a vector-borne viral disease affecting white-tailed deer. We observed that disease reporting rate was positively associated with vector species richness (VSR: where species of midge belong to the large genus Culicoides). We thought this could be because high VSR:

We found no support for 1 and 2 in our system, but strong support for 3. This means that VSR can manifest as functional diversity, facilitating parasite transmission. It remains to be seen if this operates more widely in vector borne diseases.